Daniel Ricciardo joined the ranks of the multiple grand prix winners with his second victory of the year at the Hungaroring.

He is the 73rd driver to win more than one race, and joins other two-time winners such as Wolfgang von Trips, Patrick Depailler, Jean-Pierre Jabouille and Elio de Angelis.

On his way Red Bull passed their 3,000th lap in the lead. They are fifth in the all-time list but need almost twice as many again to catch Lotus, who are on 5,623.

For the second race in a row Hamilton broke his personal best record for most places gained during a race. Having made up 17 in Germany, he climbed 19 in Hungary (aided by Daniil Kvyat failing to get away on the formation lap). The all-time record position gain is 30 in a world championship race (Jim Rathmann, 1957 Indianapolis 500) and 26 in a Formula One race (Roberto Mieres, 1954 British Grand Prix), both of which are obviously unbreakable for now as the current grid is too small.

It was Mercedes 100th Formula One race and Hamilton’s 50th podium.

Jenson Button became the eighth different driver to lead a race this year, heading the field for a single lap. The last time a season was completed with no more than eight different race leaders was in 2011. Another surprise for this busy weekend: Rossi in, Chilton out. 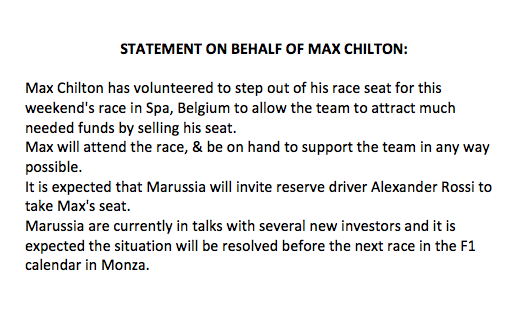 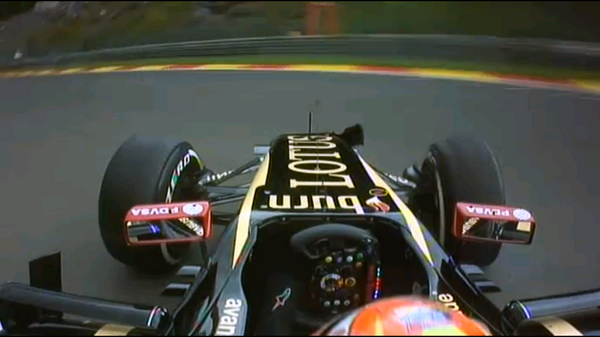 That crash was just bizarre. What was he doing out there?
http://i40.tinypic.com/2w7fw9v.jpg
Top

donald29 wrote:That crash was just bizarre. What was he doing out there?

Yea. He was well far out the corner and then just drove off the road

. I suppose you expect the unexpected with Pastor...
My blog: http://f1andthat.wordpress.com/
Top

Nice to see some drivers doing great in these conditions.

Ferrari looks good under these conditions. Lotterer says he had to learn how to handle the power, braking points "at the end, you don't want to look like an idiot"

THis should be a great race, I sure hope Kimi and Alonso can get a car from Scuderia they deserve. But I think Mercedes is just too far ahead of them. Spa is always a great race no matter what. Unpredictable weather and fantastic corners make for an exciting race! Can't wait for the lights to go out.
Top

Who else thinks Ham and Ros will crash each other, fighting for the win?

It seems there's a small problem with Alonso's car.
Top