The last time a German driver won the German Grand Prix in a German car was back in pre-world championship days, when Rudolf Carraciola triumphed at the Nurburgring Nordschleife in 1939.

Rosberg took the seventh win of his F1 career, giving him as many as Juan Pablo Montoya and Rene Arnoux.

Hamilton’s brake failure in Q1 resulted in his lowest starting position since the 2012 Spanish Grand Prix, where he lined up 24th after being excluded from qualifying after running out of fuel.

Valtteri Bottas became the second driver this season to score the first three podiums of his career in consecutive races. Daniel Ricciardo did so in Spain, Monaco and Canada – having been stripped of his podium finish in Australia. The last driver to do so before them was Hamilton in 2007.

The strong run of form from Bottas has helped move Williams up to third place in the constructors’ championship. They haven’t finished a championship that high since 2003, when the were second.

On the other side of the coin, Sauber have now gone ten consecutive races without scoring a point, which is their longest ever such streak.

Adrian Sutil also took an unwanted record in Germany – he started his 119th race without finishing on the podium, breaking the previous record held by Pierluigi Martini.

Sebastian Vettel finished in front of Daniel Ricciardo in a race for the first time this year. That leaves Kimi Raikkonen as the only driver yet to beat his team mate in a grand prix this season. The F1 circus arrives at Hamiltown!
My blog: http://f1andthat.wordpress.com/
Top

I have a feeling that Kimi will get a podium here.
Top

iceman1 wrote:I have a feeling that Kimi will get a podium here.

Oh. Lewis is on fire.

What a bad luck in qualifying.
Top

David Coulthard says that Lewis Hamilton's Mercedes has a hydraulic issue because Hamilton reports that he can't stop the car when he is told to do so.
Top 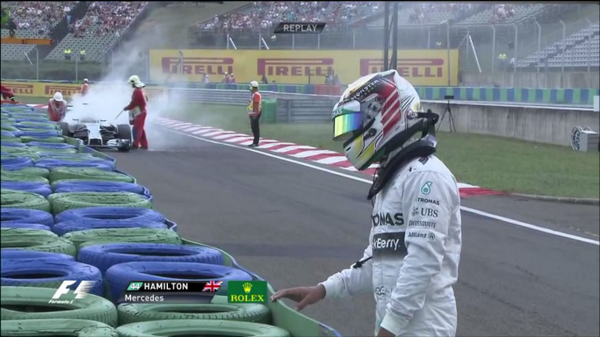 @adamcooperF1: Almost certain to be a chassis change and pitlane start for HAM - and he's probably lost all those power unit elements
Top

@MercedesAMGF1: UPDATE: A fuel leak on @LewisHamilton's car lead to fire in the engine. Source of the leak not yet clear. Only identified when car returns
Top

Hamilton thinks Rosberg will extend his lead with more than 20 points.
Top

RED FLAG. MAGNUSSEN IN THE WALL
My blog: http://f1andthat.wordpress.com/
Top

Vettel good, glad to see that. Maybe even a top podium step tomorrow.