Didier Pironi 1978 on board

Lewis Hamilton claimed the 27th win of his career in the British Grand Prix, which was also the second time he has won his home race. His victory moves him level with Jackie Stewart’s tally of 27 world championship wins. Only six drivers – including Sebastian Vettel and Fernando Alonso – have won more.

Hamilton lined up sixth on the grid, the lowest position he has ever started a race he went on to win. His previous best was also at achieved at Silverstone, from fourth in 2008, which he repeated in Hungary the following year.

Nico Rosberg gave Mercedes their 25th pole position. It was also the eighth of his career, giving him as many as Jenson Button, John Surtees and Ricciardo Patrese. However in the race he posted his first retirement of the season, bringing his run of eighth consecutive podium finishes to an end. He had also scored points in the last 17 races – a streak bettered only Kimi Raikkonen (the record holder with 27), Michael Schumacher, Alonso and Vettel have bettered.

Alonso is now the only driver to have completed all 561 racing laps so far this year. He also kept up his record of scoring in every race this year, as did Nico Hulkenberg.

Jules Bianchi took advantage of the rain in Q1 to claim his and Marussia’s best-ever starting position with 12th.

Button’s hopes of scoring a first podium finish in his home race were dashed once more on his 15th appearance at Silverstone.

Two drivers made their first ever appearances in F1 practice sessions on Friday – Daniel Juncadella for Force India and Susie Wolff for Williams. The latter became the first woman to participate in an official F1 session since qualifying for the 1992 Brazilian Grand Prix – 8,126 days ago – when Giovanna Amati failed to make the cut in her Brabham. Rosberg had to change his helmet design because it contained a picture of the golden trophy. The new version is much better! 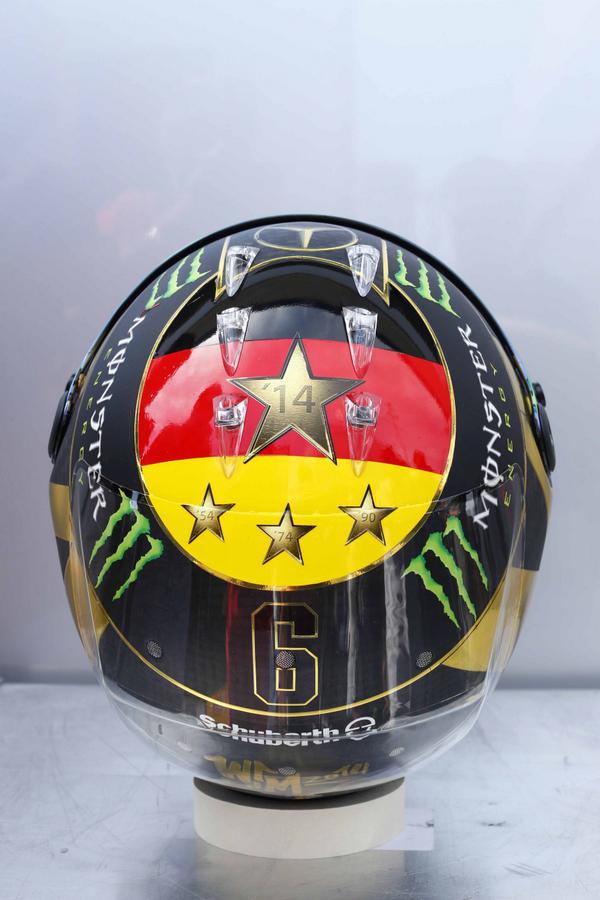 And it doesn't seem anyone is gonna run FRIC this weekend. I heard Caterham will protest against anyone who tries to use the system.
Top

It is confirmed, all the teams have removed the FRIC system from their cars and it will not be used in Germany.
GET WELL SOON SCHUMI
Top

What do you mean with "will not be used in Germany"?
Only for German gp or rest of season FRIC not allowed?
Top

For the rest of the season. If a team uses it and others don't they are open to being protested against.
Top So actually banning FRIC was useless. Nothing has changed really. Mercedes still on top.

Massa's time is not directly comparable because he went out much later in the session and did a shorter stint, presumably with slightly less fuel. The Williams is definitely not 0.7 quicker than a Mercedes on race pace
Top

Massa's time is not directly comparable because he went out much later in the session and did a shorter stint, presumably with slightly less fuel. The Williams is definitely not 0.7 quicker than a Mercedes on race pace

Yeah sure, but the Williams in general is looking competetive, in the long runs it was close to the pace of the Redbull and about 0.4 sec slower than the Mercedes.
GET WELL SOON SCHUMI
Top

Mclaren has taken the joker to change the gear ratios on their cars .
GET WELL SOON SCHUMI
Top
Locked
80 posts