This was Mercedes’ tenth one-two, half of which have come in the last five races. The last team to score one-twos in five consecutive races were Ferrari in the 2002 Hungarian, Belgian, Italian, United States and Japanese Grands Prix.

Ninth place for Jules Bianchi meant he scored Marussia’s first points in their 45th race since the Russian-backed team’s first race in 2012. Prior to that they started 38 point-less races as Virgin.

That leaves Caterham the only team in F1 today which has never scored a point. Like Marussia, they changed their identity in 2012 having competed in the previous two seasons as Lotus. If they fail to score a point in the next 11 races they will equal HRT’s record of most starts without a point.

Valtteri Bottas’s power unit failure meant he failed to score a point in a race for the first time this year, leaving Rosberg, Alonso and Nico Hulkenberg the only drivers who have scored at every round.

Mercedes extended their streak of leading every lap of the season so far. They are the first team to lead every lap of the first six races since McLaren in 1988, who didn’t fail to lead a lap until the start of round eight at Silverstone. Thank you! Canada's a great venue. Should be a good one. It's a do or die race for Ferrari this season, I hope they've managed to sort out some of their issues and be more competitive.
My blog: http://f1andthat.wordpress.com/
Top

Jules Bianchi clouting the barrier at the exit of turn 4. Damaged suspension.

Ferrari looks like they've made a step forward. If they manage to beat Red Bull this weekend I'd say they'll be quite satisfied.
My blog: http://f1andthat.wordpress.com/
Top

Massa had ERS issue in FP1, he did only 7 laps.
GET WELL SOON SCHUMI
Top

Maldonado is told that the Lotus was sent out with the wrong engine mapping, and that the car could have been damaged by going out onto the circuit.

What are you doing Kimi? 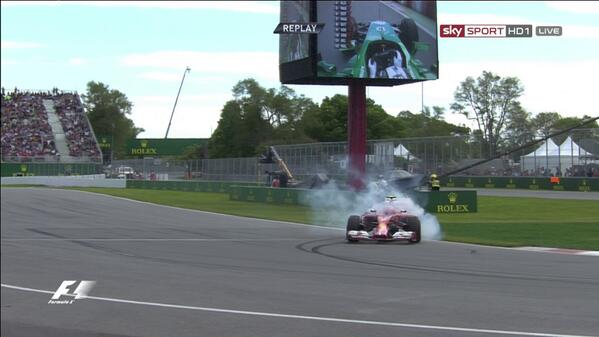 Just going for a smoke

Problem for Bianchi's engine. End of the session for him.
My blog: http://f1andthat.wordpress.com/
Top

Raikkonen told:" Slow down, slow down we have a problem."
Raikkonen: "I have a problem with the power." #F1
GET WELL SOON SCHUMI
Top