Any links to BBC Forum?
Top

Drive of the day must be Button.
Top

how come if anyone says something against hamilton theyre slated?

I mean, Lauda is a knob no doubt, and he is over the top and just headline grabbing. Maldanado DOES look like a serial ra####, but theres some elements of truth in there.

Look at lewis' incidents. Did the same thing twice in monaco, going up the inside regardless of the other cars position or the lack of gap. Did the same in canada twice also. Infact, you could compare Spa to canada with button. Lewis was reprimanded, but he's just not aware anymore. Look at last year, In singapore he tried to close a door that wasnt even his; he did what maldanado did and just cut blatantly across Webber just like he didnt look for kobayashi who was no way in hell 'behind' lewis, otherwise why did he hit the backend of the side pod/before the rearwheel? Monza again went for a space where it was actually Massa. Took himself out of the race twice on his own accord.

He has made the same mistakes over and over. Going for a gap that never existed 4 times; Monaco twice and canada twice. He did the 'door closing' thing twice; Singapore and today in belgium.

lewis has never made those mistakes before, ever. Now he has become prone to them.
Last edited by Zack on 28 Aug 2011, 15:37, edited 1 time in total.
Reason: Avoid foul language!!
Top

Koyabashi - Hamilton accident : No doubt Hamilton is to be blame equally. From your theory, seems it inherits in his driving style.
Better than a thousand hollow words is one word that brings PEACE -Buddha
There is no point in defining a point... But there is a point in trying -Zack

Lewis, like in 2010, is overdriving. He's so frustrated at seeing Vettel in the perfect Red Bull world and he wants in. He won't win another title until he calms down and realises that he has to finish races at the front and not make silly errors. In F1 2011, you get more than one chance. Prior to 2011, you had to take the chance and that was what Lewis was so brilliant at doing, but now overtaking is so easy, you have to bide your time and he hasn't seemed to grasp that. People talk about Hamilton being the pass master - and he is still very good at it - but this season both Button and Vettel have made critical race winning passes and not one of them has resulted in an accident. The same cannot be said for Hamilton.
F1Zone.net News
Top

The thing weird in Hamilton's incident is that even with the DRS open it was Kobayashi who was faster on the straight line! The DRS wasn't effective at all for Hamilton and Button, maybe it was designed for a dry qualifying session rather than a race device for overtaking. Hamilton didn't check his mirrors believing he was ahead enough with the DRS.

It was a nice race, Schumacher shows he matches the speed of Rosberg in race trim! And Senna shows his unexperience of starting in front! But let's see in Monza, it's still the first race in the Renault.
Top

HAMILTON: "After watching the replay, I realise it was my fault today 100%. I didn't give Kobayashi enough room and thought I was past."
Top

The pass on the two Virgins was brilliant. 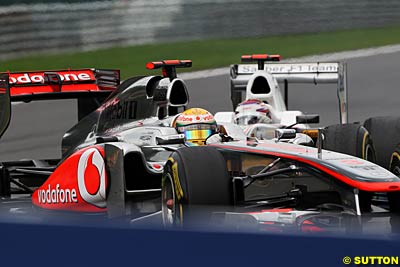